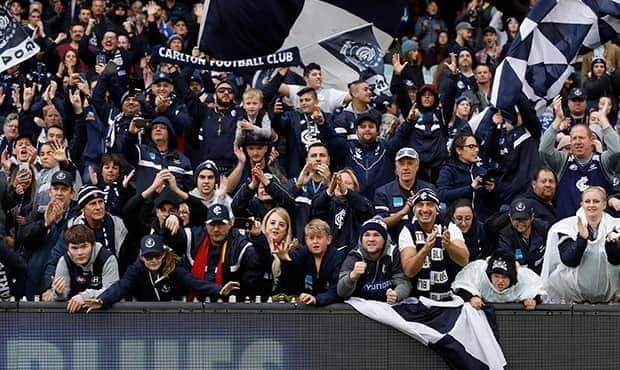 *This piece is by Debby Palti, a member of the AFL Fans Association committee. The piece was first published on her blog, here. The opinions expressed are her own personal views.

Return the Game to the Fans

The Covid19 has thrown not only a spanner in the works of the AFL season – both men and women, it has thrown a rather large, dynamite filled drum the size of Thor’s hammer, in the works.  With the AFL playing the first round with no supporters, it made for a rather soulless atmosphere of a game that, let’s be honest here, is nothing without its supporters.  It showed how the game can be played with the players celebrating a goal, taking a tackle, a mark, whatever, but it means not much really to the actual game because, without supporters, it is nothing more than a few people getting together to play a sport.

There is a TV show on paid TV called The English Game. It is about the rise of football in the UK and how it became not just a game for the “toffs” that played it, but for the people who supported it. It became a game that gave the local townspeople pride in their team and respectively, their town. It enabled lower class towns to challenge and beat the “toffs”. The pride the people felt and still do for their team was far more reaching than the actual game itself.  In the series, a team was spurred on by the support the town gave to the team and that team eventually won a Premier League cup.  Our game, Footy, is no different.

Sure, you can have players run around the ground playing the game, but it means nothing if supporters aren’t there, spurring their team on, through the challenges faced during a game. I understand that we all want the game to start up again, but at what cost?  The “hub” factor that is being touted around makes no real sense to me as a footy-loving supporter.  It will be like in the TV series, just a bunch of people running around, playing a game for no-one. This is, however, in fact, a momentous opportunity for the AFL. Here’s why.

Nevermore so than this time right now, there is an opportunity for the AFL to understand, appreciate, and respect the most important aspect of the game, besides the players – the fans. It is those people who pay memberships, go to the matches no matter where and no matter what the weather is or the cost, and who turn up, shout out, cheer and push their team to succeed.  It is not the corporates, those who sit in the boxes who are the backbone of the game – it is the supporters. Without the supporters, the members, clubs are nothing more than a bunch of toffs playing a game exclusively for themselves.

Right now, the AFL has not a golden, but a diamond opportunity to shift the game back to where it belongs – the supporters. It has an incredible chance to make them the focus for the future, for without them, the game, the clubs are nothing. The AFL must, I repeat MUST put the supporters and members in the forefront of any plans moving forward. It must speak to them, listen to them, and do all that they can to make them the most important factor of the game if the game is to be successful again.

The game will never go back to where it was, it can’t, for now, because of the huge impact this pandemic has had on the game. But let’s ask ourselves, do we want to go back to before Covid19 or do we want to move forward and make the game one that is what it should always be – for the people.

The AFL has a great opportunity here that it should not squander.

*Image courtesy of the Carlton FC