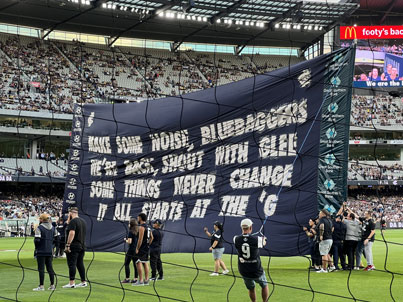 Written by fans for fans, 4Quarters kicks off featuring exclusives with Chamberlain and Collingwood legend Mick McGuane, who reveals his most treasured football memory.

The free AFL Fans Association magazine is voluntarily produced by experienced journalist and Hawthorn supporter Jason Gregory and has something for everyone – whoever they support.

Other highlights include:
• celebrating Lance ‘Buddy’ Franklin’s 1000th goal
• fan, banner, and memorabilia photos
• remembering ‘Saint’ Shane Warne
• what Pies fans can expect from Craig McRae
• why AFLW means so much for so many
• the new Whitten Oval redevelopment.

In a wide-ranging interview with 4Quarters, Chamberlain says the AFL umpiring situation cannot be solved with rhetoric or PR exercises.

He says abuse is more “an Australian Rules football issue” than an umpiring issue and the game can be a better advocate for its laws and the role of umpires. He also laments hearing that some senior games are being forfeited at the community level due to umpire unavailability.

“What I am saying isn’t about sticking up for the poor umps,” Chamberlain says. “It is about how it is impacting the fabric and viability of the game. Whether we are cognisant of it or not, directly or indirectly, we are bringing down a game we profess to love when we behave poorly.

“If there is no umpire to officiate, the game cannot go on and we cannot barrack and cheer. There is no problem with light-hearted banter, the oohs and aahs and barracking, it’s the crossing of the line.

“We must come together to say that the game doesn’t accept it. Clubs and leagues need to walk the walk and define the environments and parameters of what is acceptable. I would certainly look to engage the playing group, and the leadership of the playing group, in anything I was trying to amend in the game.

“It is the players who have a profoundly positive influence over supporters and young people, they’re the legends. Anything you want to get done in the game you need the players to own it, to understand why it’s relevant and important and have them help you drive it.”

Chamberlain also gave a strong indication that 2022 may be his last year, saying “the only reason I am back this year is to umpire with a full house again.”

McGuane tells 4Quarters that his most treasured on-field moment is not his epic 1994 Goal of the Year in Carlton blockbuster at the MCG, but something much more personal. He reveals for the first time that the moment he relives most often is a chip pass to an unmarked mate in a back pocket.

“A lot of people would think my favourite memory is that goal,” he says. “But to be honest, it was the last kick of the 1990 Premiership when I kicked it to Pants (Darren Millane). Pants held the ball in his possession and then threw it up in the air when the siren went.

“To have a treasured moment like that with a guy who I thought was going to be the next Collingwood captain. Unfortunately, he passed away in October 1991... it transcended the game of footy.

“I am always coming back to the connection, if I see a number plate on a car with 42 (Millane's guernsey number) or someone calls me with 42 in their mobile number, quite often I will have a flashback to that moment.”

AFLFA membership is free, and fans are encouraged to join at www.aflfans.org.au.More information: Jason Gregory is available for interview via AFLFA president Cheryl Critchley on Email: media@aflfans.org.au

Football fans have expressed frustration about ticketing issues and over-umpiring in response to figures that reveal AFL crowds are at their lowest in 26 years, excluding the past two COVID-ravaged seasons. Thoughts? ... See MoreSee Less

While it would be unrealistic to expect attendances to bounce back to pre-pandemic levels, crowds in 2022 are, on average, at their lowest since 1996, when fewer than 30,000 people per match attended ...
View on Facebook
· Share

Ump fury ‘straw that breaks the camel’s back’, but it may not be causing AFL’s crowd issue

Ump fury ‘straw that breaks the camel’s back’, but it may not be causing AFL’s crowd issue
View on Facebook
· Share

AFL Fans Association · Monday, May 23rd, 2022 at 6:14am
@FansAFL
Football fans have expressed frustration about ticketing issues and over-umpiring in response to figures that reveal #AFL crowds are at their lowest in 26 years, excluding the past two COVID-ravaged seasons.
https://t.co/t5jCLThv84
View on Twitter

AFL Fans Association · Friday, May 20th, 2022 at 4:05am
@FansAFL
The #AFL’s decision to stick with a day grand final at the MCG this year has split opinion, with fans hailing it as a “victory for people power” but one club president dubbing the rejection of a twilight clash as “nuts”.
https://t.co/cUn7gPBQSr
View on Twitter

In reply toElise Potter
@elisempotter Thanks Elise. 👍
View on Twitter
0
1