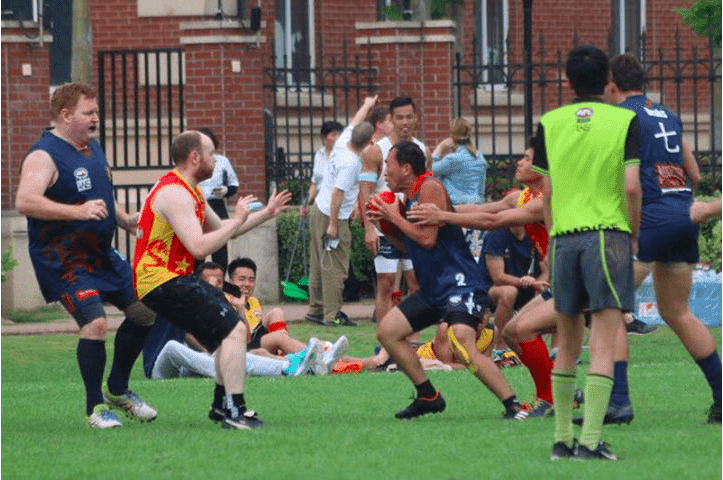 Yoshihiro Imagawa, a St Kilda supporter based in Kyoto, travelled to Shanghai for the AFL match. Below, he shares his experiences at the game and the Shanghai Cup that he was involved in as a player.

The Shanghai clash has been said that it was a sold out game, but I have seen empty seats at the Jiangwan Stadium. Some fans and journalists have expressed opinions that holding an AFL game was a waste of time and money.

To be honest I had thought the same when St Kilda stepped in to travel to China giving up a home game at the stadium in Melbourne's Docklands. Most of the usual St Kilda fans would miss out on a home game. But my involvement in the Shanghai Cup has somewhat changed my opinion. Yoshi breaking through the congestion

On 1st June, footy players around Asia gathered at Wellington College for the Shanghai Cup. There were three divisions: Open, Masters and Junior. The games were played in warm conditions.

Players have different backgrounds. Expats have been playing footy since they were young. Some Japanese players have played rugby before playing footy. I am 46 and have never played any relevant sport before joining the Osaka Dingoes at the end of 2017.

At the footy tournament, I was a playing squad at the Hong Kong Dragons Master team and was welcomed warmly by coach, teammates and club members.

Other players are talented and demonstrate good skills on field. Good ball uses with handpasses and kicks. Facing them was a great experience for me as well as playing footy internationally.

Unfortunately I did not kick a goal, but have got several possessions and kicked footy on the boundary line.Without St Kilda playing in Shanghai, I would not have been in the wonderful competition.

New friendships have been established at the Shanghai Cup no matter who they are playing for. We also enjoyed socialising off the field.

Also having trained with the Dingoes recently, I was told that I came back to the club as a different player. My kicking skills were improved through the Shanghai Cup. Participating in the footy tournament can bring any players improvements and positives, I think.

Meanwhile many kids played hard and showed great skills in the Junior Division. They kicked footy outside the boundary line.

AFL CEO Gillon McLachlan visited the tournament and handballed towards children. Youngsters have much interest in the Australian sport.

Good atmosphere was created at the footy tournament. It’s all thanks to AFL Asia’s hardworking. My big shout goes to the President Matt Gale who has organised the tournament mostly. Footy in Asia has been developed slightly and a new team has been established in Mongolia recently. If more players participate in the Shanghai Cup and local people start playing footy, the professional game is more patronised.

I think kids spread stories of playing footy to their friends and more children will play the sport and watch the professional match. In other words, both AFL game in Shanghai and Shanghai Cup bring more people participating in. But on the other hand, more promotions are needed to bring more spectators.

The Osaka Dingoes held Auskick clinic at primary school in Shimane in May. Over 30 children participated in and they picked up skills quickly and were enthusiastic to play the Australian sport. Once we work hard, more people attend the Shanghai clash and invest in playing in China is worth for both St Kilda Football Club and Port Adelaide Football Club.

Other my suggestion to promote Australian Rules Football is holding an "Australian Fair" to play a video clip providing a summary of the sport including basic rules to make the sport attractive. Having passions of playing footy and needing more experiences, I will be locked in the next Shanghai Cup and St Kilda's Shanghai clash. I am sure good experiences make players commitment to the sport and footy matches/tournaments.

If you have thoughts about 'expansion' and whether or not the AFL is vindicated in this international effort, drop us a line. Send us your thoughts.

**Thank you to Yoshi for taking the time to write and engage with us.