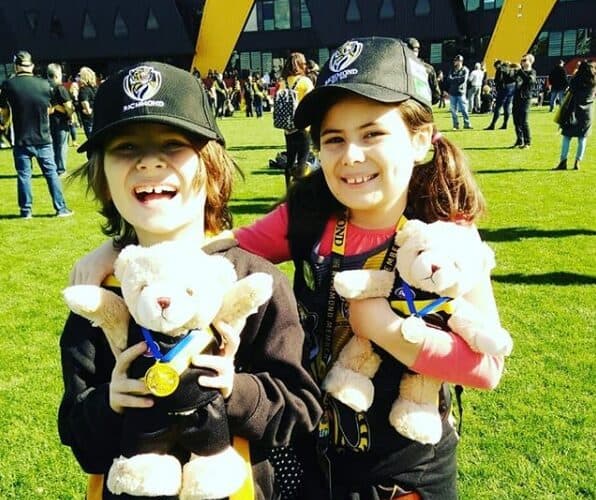 Penny and Lilli, off to the footy

The footy landscape has changed significantly over the last 30 years. Many fans have witnessed the demise of the parochial passions of the VFL and the birth of the Australian Football League and the reframing of 'sport' as another kind of 'entertainment'. Fans too have a changing relationship to the game - fitting in going to games in between work and other kinds of family-based shared activities.

Cathy Rubin, a member of the AFL FA and an active follower of our Facebook page, answered our call out for interviewees regarding attitudes towards gambling. During the course of our conversation, she shared her thoughts on much more than just the prevalence of gambling advertisements at the MCG, Docklands and the television or on smart phone apps.

Cathy's family's passion for the game of Australian Rules has spanned a few generations and is based around their support for Richmond, on one side and Hawthorn on the other. One key point stuck with me after our conversation: from her point of view, the prevalence of gambling advertisements damages the family-friend quality of going to the footy.

Over the last few years I’ve become really taken aback by the normalisation of gambling within sport. Sport is not about gambling. It is about having fun, doing one’s best and developing physical skills. For us fans, it’s about going out together, watching our favourite teams play. It’s something we can do as a family and it is something my family has been doing for generations. We live in the outer suburbs of Melbourne and we drive to the station before taking the train into Richmond to get to the G. It is a kind of ritual. And for us, it is our main ‘outdoor’ regularly activity.

My family are all autistic. And there are lots of things we need to be cautious about in our day to day lives. Every year, we buy our family memberships for our footy clubs. One half of the family supports Hawthorn, the other half supports Richmond. I’m a third-generation Richmond member. So, my children are fourth generation. Every year we always make sure we each have a membership. We just get the no-frills membership as that is what we can afford.

For quite a while, one of our family activities has been playing Minecraft together. After dinner, we’d each get on our own computers and play Minecraft. My husband is a computer technician and he built the computers for each of our children. Playing the game is a cheap form of ongoing entertainment and it is something that connects us. We can all play it at home and we all connect with it in a different way. There are eight of us all up: Kids are two girls and four boys. It’s quite a big family.

Although we have been long-term Richmond members, there had been a few years when we weren’t going so often. Then, in 2017, I started taking my youngest daughter, who was eight years old at the time. The first game we went to was the Dreamtime Game. During the game a punter spilled almost a whole tray of beer on her and those sitting around her. This was some kind of event to remember her first game by. I had decided to take her to this game in particular because of the cultural aspects of the game: inclusive of the ceremony before the game and for what it stands for. Even though our family supports different teams, our favourite players have been Cyril Rioli (prior to his retirement) and, over the last couple of years, Daniel Rioli. One of my sons is an architecture student and so when we go to games we also take a look at the stadium we are in. I used to go to games with my grandparents as a child, so, obviously the MCG has changed a lot since back then. So, footy is a lot to do with what happens on the field, but it is also very much to do with what happens off the field: the culture that surrounds it.

As it had been a few years since I was a regular at the footy, we were all really taken aback by the amount of gambling advertising. There seemed to be about four to five gambling companies all vying for attention. There was no way for us to avoid the gambling advertisements. Our children all use tablets or smart phones and there is no way of preventing the gambling companies’ apps from being downloaded by teenagers. So even though we were taking our children to what we thought was a ‘family friendly environment’ – i.e. the footy – it turned out to be less than family friendly, thanks to all of the gambling promotion.

No-one in our family gambles. But, because we were at the footy or watching it live on TV, we had to suddenly have a conversation about the dangers and problems associated with gambling. The prevalence of the advertisements was a surprise. Moreover, the framing of the ads were really snide. I can’t remember exactly a lot of the slogans, but, they seemed to be encouraging gamblers to make rather risky bets and they were over-stating the likelihood of success, and were slipped in as if they were part of the game experience.

I can’t fathom how there is an official gambling partner of the AFL. How is this even a thing? It doesn’t make sense to me that it got to this stage. You can’t take out the ‘family aspect’ of the footy. And to me, this is what gambling is doing. It is part of making the footy a problematic space for families. To be honest, I’ve never heard someone say, ‘all this gambling advertisements is good for footy’. In the past, the AFL has got rid of smoking advertisements, and so I’m not sure why a new rather questionable source of revenue had to be found. Problematic gambling is mixed up with domestic violence and mental health. These are things that the AFL cares about; yet at the same time they get so much money from gambling companies.

Thank you to Cathy Rubin (and family) for sharing your stories and for the photos.

Our AFLFA survey seeks your input on issues you believe are most important so we can influence changes to improve your fan experience, whether that be ticketing, memberships, affordability, scheduling, rules, umpiring or something else. Your views are important to us, so please take a few minutes to fill the survey out. And feel free to share the link with your friends and on social media. The more responses we get the better. Click on the survey link to make your voice count and go into the draw to win a $50 Chemist Warehouse voucher. ... See MoreSee Less

Two "selfish" Victorian men who breached Western Australia's strict COVID travel laws to go to the AFL grand final and ended up in the rooms of the victorious Melbourne team have been handed 10-month jail terms. But seven months will be suspended. ... See MoreSee Less

Two men who breached WA's strict COVID travel laws to attend the AFL grand final are sentenced to 10 months in jail, but most of the terms are suspended.
View on Facebook
· Share

Collingwood legend Des Tuddenham found a special way to pay tribute to one of his great mates as Melbourne stormed to its first flag in 57 years. ... See MoreSee Less

If residents of Port Melbourne thought Collingwood legend Des Tuddenham made an unusual sight on grand final day, it was all done in honour of his late mate Frank “Bluey” Adams.
View on Facebook
· Share

AFL Fans Association @FansAFL
Wednesday, October 13th, 2021 at 6:19am
Two "selfish" Victorian men who breached Western Australia's strict COVID travel laws to go to the AFL grand final and ended up in the rooms of the victorious Melbourne team have been handed 10-month jail terms. But seven months will be suspended.
https://t.co/xu0KjEHqyI
View on Twitter
1
15

Gold Coast Suns @GoldCoastSUNS
As a club, we're committed to the fight against racism. https://t.co/ubLCdRypmW
0
10

AFL Fans Association @FansAFL
Friday, October 1st, 2021 at 2:51am
Post-COVID, should the #AFL Grand Final be shared with other states and territories?
We know the MCG has a long-term contract, but the pandemic has reignited debate...
https://t.co/f66KN9UkYv
View on Twitter
1
4