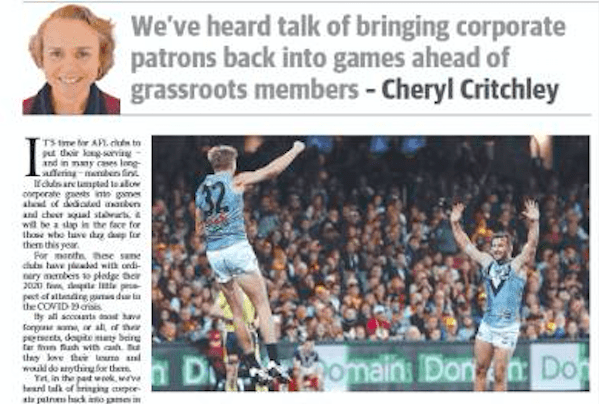 *This is article first appeared in the Herald Sun on 9th June 2020.

It's time for AFL clubs to put their loyal members first. If they are tempted to allow corporate guests into games ahead of dedicated members and cheer squad stalwarts, it will be a slap in the face for those who have dug deep for them.

For months, AFL clubs have pleaded with members to pledge their 2020 fees, despite little prospect of using them due to the COVID-19 crisis. By all accounts, most have forgone some or all of their payments, despite many being far from flush with cash.

Yet we're talking of bringing corporate patrons back in dining areas, possibly ahead of grassroots members and cheer squads.

Fans understand that sponsors bring in big dollars. But members do too, as a collective, and give the game its colour, passion and character. The lack of atmosphere in Round 1, which had no crowds, underlined their importance.

Without fans, who pay to attend and provide eyeballs for TV ratings, there is no game.

Now is not the time to entertain them. Clubs must offer at least some tickets to members who have paid their 2020 membership fee.

Corporate club members should also have priority over guests who don't support the competing clubs, and AFL/stadium functions should include some stadium members who follow the competing teams.

Clubs/stadiums could use a lottery system or give long-serving members priority for some of the tickets. If they didn't take up the offer, sponsors could take them. This would recognise members who spend every year on memberships, reserved seats, social clubs and merchandise.

This month the AFL told the Herald Sun a "return to crowds" working party was considering how to divide tickets and hinted that long-serving members and key partners would be rewarded.

AFL Commission chairman Richard Goyder and AFL chief executive Gillon McLachlan, who have worked hard to get footy back, emailed fans to thank them for their support. We can only hope the fans' loyalty is rewarded.