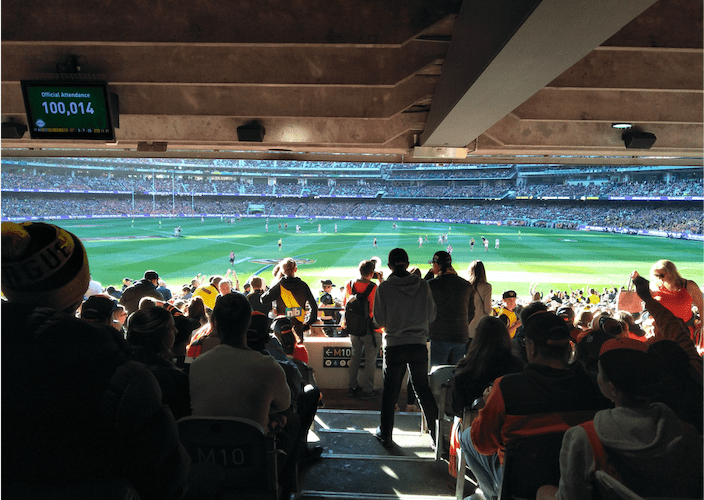 Even in late November, there is barely a week when some footy issue doesn't enliven the social media world and keep footy journalists churning out the copy. Footy is always in the news. The AFL loves the passion of the fans and the conviction of fans' opinions. The AFLFA is the only organisation which seeks to represent fans' interests and opinions. Below is an interview with the AFLFA's President, Gerry Eeman:

So, how are things going with the footy world?

The main issue that we are concerned with at the moment is the amount of gambling advertising. You can’t follow the footy without being bombarded with gambling ads. The game is meant to be family friendly, but there is nothing family friendly about gambling ads. Gambling is an activity for adults, not children. The presence of mild warnings such as ‘gamble responsibly’ aren’t sufficient in warning against the dangers of gambling.

Why is this such a big issue for the AFLFA?

This is what we hear back from our members. We regularly receive feedback via email, Twitter and Facebook. We also regularly conduct polls on our Facebook page. The overwhelming presence of gambling ads is a real concern among for fans. It cuts across supporters from all clubs and throughout the country. The gambling ads are a reason some fans stop taking their children to games. We hear that parents are having to teach themselves the best ways to talk to their children so that they don’t gamble. Many parents are shocked by their children’s knowledge of gambling odds. Our role at the AFLFA is to convey to the AFL what fans are sharing with us.

What about the AFL’s proposal for shortening the half-time break?

This is strange because the AFL hasn’t consulted with either the AFL Players Association or us at the AFL Fans Association. The AFL hasn’t consulted with any of the stakeholders. The AFL doesn’t need to agree with everything the stakeholders have to say, but it should at least reach out and consult before making a decision.  We would have loved to hear from them.

This appears to be a decision which prioritises the interests of TV audiences rather than fans at the games. It would seem that the AFL are worried about losing viewers at half-time and they feel that shortening it is one way to overcome the problem of viewers dropping out. The feedback we receive is that fans who attend games simply don’t want it shortened. They need the time to navigate the queues to go and buy food and drinks and to go to the bathroom. Fans don’t want to be doing this during actual game time. The only good thing about it would mean a reduction in time available for gambling advertisements at half time.

What are the other big issues facing fans and the AFLFA?

The AFL currently gives away thousands of Grand Final tickets to the non-competing clubs. The clubs then sell the tickets as part of expensive packages – often well into the thousands of dollars. This is one reason why it is so hard for members of competing clubs to actually get tickets for the Grand Final itself.