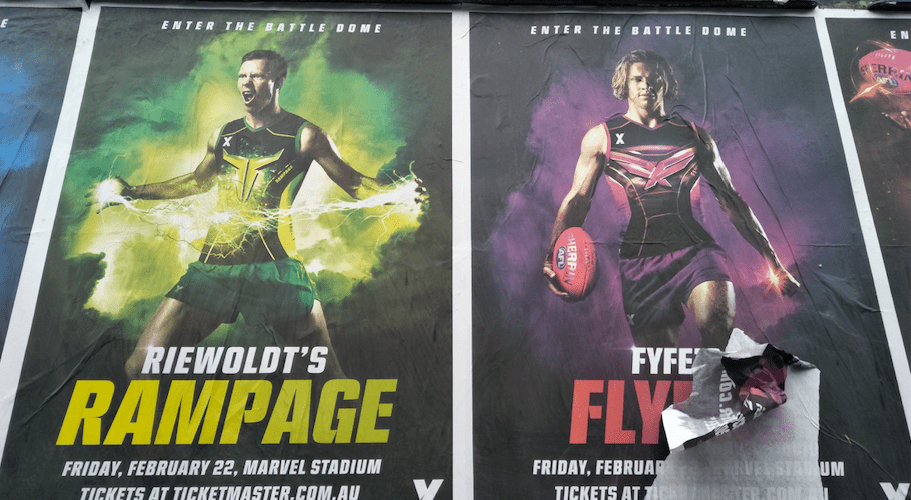 Footy fans have put up with a lot over the years.

Since the days of the footy Record’s Ampol Girl of the Week, Carlton’s Bluebirds and a North fan riding an elephant at Arden St, VFL/AFL types have hit us with some pretty zany ideas.

More recently, we’ve had Hawthorn’s Power Ranger jumpers, talk of a best of three Grand Final series and the bid to extend the goal square to 18 metres.

Fans are a hardy lot and whenever the AFL or club officials come up with yet another whacky concept, we suck it up.

Some of us even get into the spirit of ‘cuddle cam’ and Carlton’s hovercraft for the sake of the kids.

But then along came AFLX.

The AFL’s attempt to emulate ‘watered down’ and ‘sped up’ versions of other sports, such as Twenty20 cricket, has almost universally united fans – against it.

Launched in 2018 with dancers, circus performers and parachutes, the “fast and exciting version of Australian Football”was about as exciting as Sam Newman’s political musings.

Played on a rectangular field with seven per side and two 10-minute halves, it resembled a mid-week training drill.

This year they jazzed AFLX up with new logos and teams picked by four star captains – Patrick Dangerfield (Bolts), Nat Fyfe (Flyers), Jack Riewoldt (Rampage) and Eddie Betts (Deadlies). The AFL has persisted with this concept despite the lack of interest from footy fans. The event is one way of getting patrons into a newly re-named stadium at the western end of the Melbourne CBD. The AFL's interest in this down-scaled variation on the game, compromises its commitment to the newly established and still fledgling AFLW. The idea was for them to choose from a pool of 100 players in a live draft that was likened to the old schoolyard team-picking system that will give the less sportingly gifted among us PTSD.

Thanks, but no thanks.

An AFL tweet on December 16 promoting AFLX drew 335 comments in the first few days – almost all of them far from complimentary.

Some described the hybrid game as ‘cringeworthy’, ‘embarrassing’, ‘meaningless’, ‘a waste of time and money’ and ‘absolute garbage’.

“Just shows how far AFL management is not aligned with 99 per cent of fans who know this concept is rubbish,” said David, a Collingwood fan.

Lee Hallum didn’t hold back: “Please stop with this nonsense. You have the perfect sport on your hands, yet every year you mess with it, and diminish the overall product.

“Please can’t you appreciate what you’ve got and STOP F…… WITH IT! No rule changes, no pre-season wankfests like AFLX. Leave it alone.”

Many said the money would be better spent on grass roots footy or AFLW.

“Grass roots football is near on death if not dead already thanks to your own doing and you’re putting money into this rubbish where it could into helping clubs and leagues that are in desperate need of it,” opined Damian Chandler. “Get your priorities right.”

One of the few enthusiasts, Samuel Hallett, said, “IDC what people say, this looks sooo good it’s kinda like what the NBA do with the ALL STARS.”

Despite the cynics, the event on February 22nd will no doubt draw a crowd. A crowd, though, which will consist of many people using free tickets.

Melbournians love their sport and by then AFL diehards and their families will be hanging out for footy in any form.

Kids might also like it, although my teenagers have no interest whatsoever (then again, it’s hard to interest teenagers in anything!)

Regardless, the money splashed on this bizarre attempt to create a US-style ‘product’ to market overseas could have been much better spent on AFLW and grass roots footy.

If you invest more in junior, suburban and country football, where some clubs are struggling, you’ll have a whole new generation that plays and loves the game without the need for gimmicks.

Australian Rules is unique, and people overseas do like it, but they already have their own sports to obsess over.

We should get things right at all levels locally before trying to infiltrate markets that may not want or need another professional sport.

Fans love their footy and praise the AFL when it gets things right, like resurrecting kick-to-kick and lifting the Grand Final ticket allocation for competing club members from 15,000 to 17,000 in 2017.

Most are also grateful that the Grand Final’s daytime slot was retained (at least for now) and the AFL’s support for social justice issues like marriage equality has been excellent.

But many agree that the money ploughed into AFLX would be better directed into growing the women's game at the local or AFLW level.

Cheryl Critchley is AFL Fans Association vice president and a Richmond member. Her personal views don’t necessarily represent the AFLFA or its members.