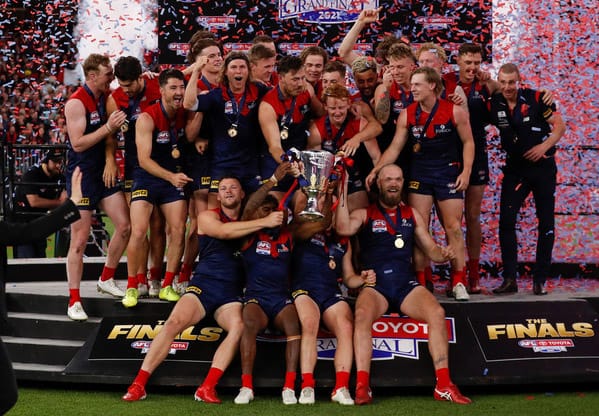 Footy fans have appealed to the AFL Commission to return the Grand Final to its popular daytime slot after AFL CEO Gillon McLachlan said on Friday that no decision had been made.

This followed a report by Channel 7’s Tom Browne last Wednesday that the AFL Commission was likely to rubber-stamp a twilight Grand Final this week.

The AFL Fans Association is pushing for a day Grand Final after various polls have shown the overwhelming majority of fans prefer a day game. The AFLFA’s latest Twitter poll drew 1054 responses with 79.9 per cent preferring afternoon, 17.3 per cent twilight and 2.8 per cent night.

The AFL Commission had agreed the 2021 Grand Final would be held during the day before COVID led to the game being moved to a twilight start in Perth.

On Friday, Gill told 3AW that the 2022 Grand Final timeslot had not been raised at the AFL Commission level. He said it would be discussed at this week’s meeting but was unsure if a decision would be reached.

“It won’t be at night. It will either be twilight or day,” he said. “I think there is a heritage component and a tradition that is very important to many football supporters, and I know, I get feedback so please, please be aware that everyone understands that.”

AFL Fans Association president Cheryl Critchley says the 2022 Grand Final slot should be a “no brainer” given fan support for a day game and the loyalty they have shown throughout the pandemic.

“Changing the start time would be a huge blow for those who have shown incredible loyalty,” she says. “Many paid for memberships they couldn’t use despite being unable to attend games for extended periods.

“This is the AFL’s chance to thank fans for their support during COVID by honouring their preferred Grand Final time. Businesses had to refund for services not provided due to the pandemic, but most AFL fans didn't ask for their membership fees to be returned. This debate is not just about the actual time. It’s about recognising and rewarding the loyalty of fans.”

Cheryl says most fans love the unique tradition, feel and rhythm of a day Grand Final.

“The build-up and atmosphere at the ground and in private parties around Australia are part of what makes footy unique,” she says. “The day is divided up evenly between pre-game festivities and entertainment, the match itself and plenty of time to celebrate with friends and family afterwards.”