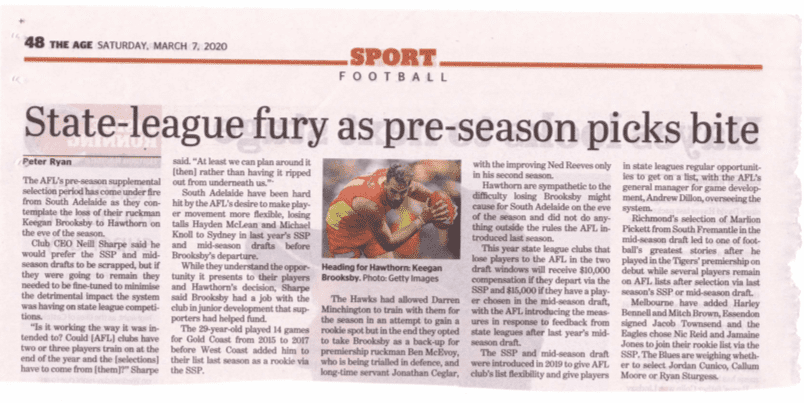 One of the things many of us fans love about footy is our sense of attachment to our clubs. We know and love the stories of the players who wear our team's colours. We trace their careers, their pitfalls and their lives through social media and appearances in the mainstream media. It's a bitter pill for many fans to see favourite players leave their club. The sight of Luke Hodge, legendary Hawthorn player, wearing a Brisbane jumper might have been jarring for many fans. On the other hand, some players make seamless transitions and establish great careers at two clubs: Chris Judd and Shaun Burgoyne to name two.

But, the Australian Football League loves opening up opportunities for player movement between clubs and increasingly between leagues.

The media loves the hype and gossip that can be created during trade period. The rumours and innuendo fill the sports pages and takes attention away from rival sports. The Australian Football League just loves being in the news!

In response to losing Keegan Brooksby to Hawthorn, South Adelaide's CEO, Neil Sharpe, said "it is very disappointing, from the club's point of view, to lose another player on the eve of the season". South Adelaide has lost Hayden McLean and Michael Knoll in previous supplemental selection periods.

These increased opportunities for players to move clubs and leagues presents players with a chance to realise their dreams. Ryan mentions the incredible story of Marlion Pickett as a case in point. Perhaps though this is yet another moment in which the Biggest League in the Land undermines the integrity and stability of state leagues.