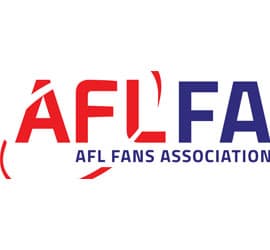 AFL Fans Association President Cheryl Critchley has stepped down after nine years with the voluntary group. Cheryl was an original committee member when the organisation was formed in late 2013 and spent six years as Vice President and two as President.

“Helping to establish and run the AFL Fans Association over the past nine years has been a privilege and an amazing experience,” Cheryl says. “This group is entirely voluntary, and everyone who contributes donates their time with one goal: giving AFL fans a voice on issues important to them. Fans are the game’s biggest stakeholders and deserve to be heard. The AFLFA exists to raise issues such as ticketing, scheduling, rule changes and Grand Final ticket allocation.

“I have loved every minute of my time with the group, whose committee is helped by interstate reps and other volunteers, including patrons Susan Alberti AC and Jason Ball, ambassador Brett ‘Trout’ Beattie, AFLW rep Fearn Harrison, IT expert Larry Blode, 4Quarters magazine editor Jason Gregory, Sherryn Jarrett, Lynton Martin and Mike Read. I thank them all for their ongoing contribution.”

Treasurer Ron Issko took over as President after the AFLFA AGM, and Secretary Debbie Hall became Vice President, replacing Justin Leckie, who became Treasurer. “Ron is our long-serving Treasurer and Spokesman,” Cheryl says. “He is a passionate Richmond fan and works hard to give fans a voice. He will make an excellent President.

“Debbie is also a dedicated volunteer with a special interest in disability and inclusion and will be a great Vice President. The AFLFA is in good hands with Ron, Debbie and their hard-working fellow committee members Justin Leckie and Sheridan Verwey, who were tonight joined by Christopher Hughes, Mark Costello, and Sally Bennett. They are well placed to take the AFLFA to the next level.”

Cheryl says it is time to spend more time with her family. “My husband Brian, our kids Jess, Bec and Ben and the rest of my family have been incredibly supportive of my AFLFA role, which has been intense. I lost my sister Christine Critchley to undiagnosed coronary artery disease six weeks before I officially took over as President, which was extremely challenging. It’s now time to put my family first.”

The committee’s Inclusion Manager, Debby Palti, has also stepped down. “Debby has been an important part of our committee and, among other things, signed the AFLFA up to the Racism. It Stops with Me. Campaign,” Cheryl says. “She is a diehard Carlton fan and passionate about helping footy fans. We wish her well as she pursues her writing and spends more time with her family.”
Incoming AFLFA President Ron Issko wished Cheryl well. “On behalf of the AFL Fans Association and every AFL fan out there, we want to thank Cheryl for her outstanding dedication to making the game the best it can be,” he said. “She has shown extraordinary commitment as a volunteer and should be proud of her achievements, particularly in ensuring the fan voice is heard on the issues that matter. She will be greatly missed.”