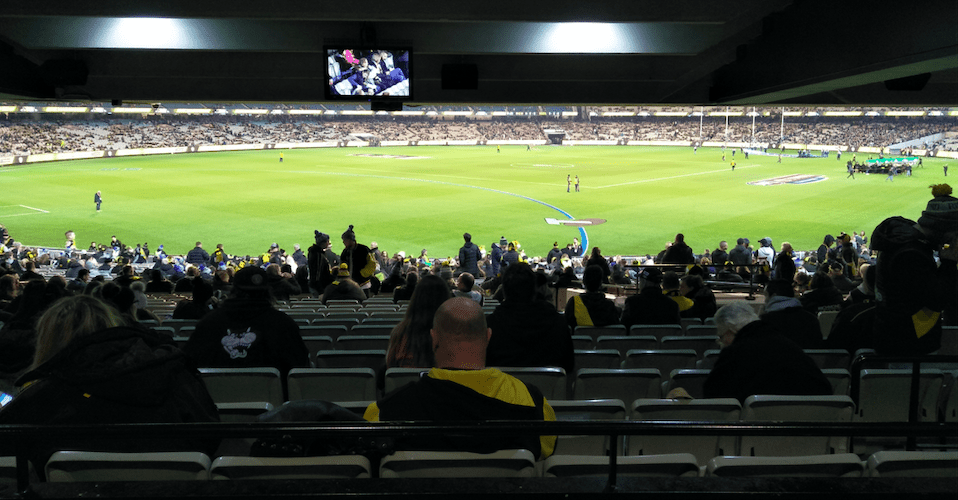 There has been much of a brouhaha regarding fan behaviour lately. The unfortunate role of "behaviour awareness officer" has come and gone. For many fans, being in the outer is a welcomed opportunity to jump and shout and barrack for your team like there is no time. Us fans play the game of believing the result is the most important thing. Supporters of all different teams, no matter which league, share much in common. The outer has its own social norms and people are free to carry on in a manner that would seem unfitting in many other parts of our shared lives. There are some things that are non-negotiable (violence, speaking discriminatorily), but mostly these are followed. After a big win by Geelong against Richmond at the MCG, Michael got in touch with us regarding the manner in which a policeman acted towards him. Michael recounts the events of the evening below.

I have been a Geelong member since 1998. I go to the footy to support my team: loud and proud. And, I make no apology for that. That is what footy is about: going to the game and barracking. I have some rules though. These are that I never say anything that is racist or discriminatory. I also never engage with other fans in a direct manner. I don’t respond to banter. My support is focused on the team and what happens on the field. My favourite place as a Geelong supporter is Gary Ablett Hill at Kardinia Park. That is a place where a group of supporters can stand and shout and support their team without fear of being kicked out for unruly behaviour. Opposition fans come there too because they too want to support their team in this way. A couple of weeks ago at the Richmond v Geelong game though, something happened to me which had never happened before. It was a Richmond home game and, as fans can probably remember, it was a dirty night for them. They had probably come to the game with some degree of expectation, but, after quarter time, we smashed them. Gary Ablett Junior was booed by a large swathe of the Richmond crowd. Just as he has been abused by many other opposition fans throughout this season. I don’t get this and I don’t like it. So, in the typical supporter fashion, I cheered even louder for him than usual. He is a champion of the game. So, I yelled out occasionally, “too old, too slow, too good” an “give them one of your Brownlows”. I also mocked the Richmond forward Tom Lynch a couple of times when he missed a couple of easy shots on goal. “That shot at goal just cost $500,000.” This is a part of barracking.

At half-time I overheard someone calling me a “dickhead”. The person didn’t say it to directly to me. I also heard a couple of people behind me debating whether or not fans should be as loud as I was being. One person interjected to say, “hey, we are at the footy. This is what it is about.” The third quarter rolled around and the Cats continued to smash Richmond. Tiger fans were pretty deflated to say the least. Then at three-quarter time, a man and his partner got up to leave. They were about to pass where I was sitting and the guy just lost his shit. He started screaming and shouting at me – for I don’t know what. He had started off by getting in my space and pointing provocatively to me several times. And then, a moment later, I felt the heavy hand of a policeman he then told me in no uncertain terms: “this is your last warning. Any more trouble and you’re out.” I hadn’t received a “first warning” and I was being blamed for the trouble. The policeman didn’t seek to calm the situation or get a balanced account of what had happened.

I left at the end of the game feeling somewhat annoyed with what had happened. In my mind, the policeman’s actions were totally flawed, as he had been threatening towards me and he hadn’t de-escalated the situation. Secondly, my behaviour was nothing unusual by the standards of the footy. The footy is a place where you go to barrack and shout and carry on. Of course, there are limits: you don’t abuse other people in the crowd and you can’t be discriminatory. I was doing none of those things and I wasn’t drunk or anything. On that night, I had felt something had changed. That there had been an over-correction in the name of ‘safety’ because of a few fights at games earlier this year. There are lots of ways we can watch footy: at home, in the pub, or on the go on our smart phones. So, if you don’t like being at the ground itself and hearing people barrack, then go to the theatre or whatever or watch the game from the comfort of your home.

*If you have a specific game-day experience, which enrages you or brings you a lot of satisfaction, please get in touch with us.