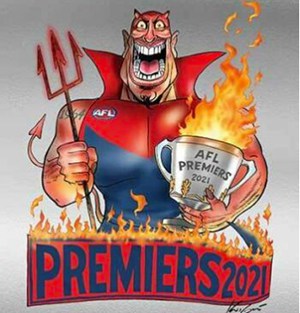 The winner of the Framed Limited Edition 2021 Mark Knight Melbourne Premiership Poster, has been announced.

It was incredibly difficult for the committee to decide on the winner. Every submission received was a worthy winner however we could only select one winner and it is Mal from Mills Park.

Sharryne secretly entered this competition for her husband Mal. He has been a one eyed Dees fan for 64 years and winning the premiership after a 57 year drought has made all his dreams come true. When Ron from the AFL Fans Association delivered the premiership poster, Mal answered the door not knowing anything about it. When the premiership poster was presented to him he was speechless and didn't take his eyes off the poster.

Like most Dees fans he couldn't be in person at the Grand Final victory. However unlike most Dees fans he didn't attend the premiership celebrations at the MCG on Dec 5th as he was looking after a friend that was going through a major health issue. Mal gave up celebrating with his premiership team and fans as looking after a sick friend was his priority.

Enjoy Mal and well done Sharryne on surprising him.