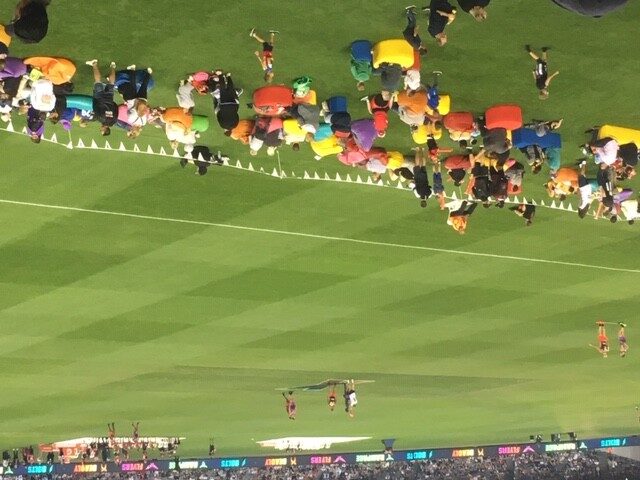 AFLX: Is it just hoopla and razzle dazzle, and what does it say about the AFL's aims?

The sports we play rarely stay the same for long. Rules and interpretations are changed as new technologies become available. Footy, of course, is not immune to change. Changes allowing for consulting video replays are implemented with the ideal of taking 'human error' out of scoring decisions. While other changes are implemented in order to reach a new market in an ever more crowded sporting landscape.

Cricket, tennis, baseball have all made efforts at speeding up their sports in an effort to satisfy time-poor and impatient millennials hungry for immediate gratification. The curious case of AFLX – ridiculed by so many footy fans on social media – is a part of the AFL’s efforts at expanding the game of Australian Rules to spaces where it can be played on rectangular fields.

The 2019 AFLX event was marked by a thick layer of Marvel-advertising. The players were done up in Marvel iconography and the players were stylised as Marvel superheroes in the promotional material. The AFLX event, held at the Docklands Stadium now known as ‘Marvel’, provided the Disney company with a few hours of heavy marketing to a captive audience.

Ron Issko, treasurer of the AFL Fans Association, went along to the event. Free tickets were widely made available, and Ron, although not yet fully-enthusiastic for the concept, is less-riled by some of AFLX’s attributes than many other footy fans. He somewhat sits on the fence as to its long-term viability: but, he is also happy to admit that he enjoyed himself on the night. The presence of star players was a key factor for him.

I put some questions to Mr Issko and he generously shared his thoughts.

What do you think the AFL is aiming to do with holding the AFLX event in February?

They wanted it as a lead in to the JLT pre-season games. In order to get the “best” players in the comp this would be the only time they could do it. If they held it in January too many of the better players would not have played due to “injury” or not ready for a full-on game.

The overall aim is to have a kind of T20 version of footy. The AFL wants to get kids involved that may not already be involved in footy. It is possible that once this format is a little more established, they will try to take it overseas.

They also said that given there is a lack of footy ovals available having a soccer pitch size for AFLX will make it easier to find ovals to play on. Playing a modified version of Australian Rules is a means of finding an easier entry point to the game.

The AFL have been trying for decades to take our game overseas with little or no success. So maybe they think that this T20 style AFLX will attract the overseas market. In my view it will not succeed overseas while it is establishing itself in Australia.

St.Kilda played Carlton in New Zealand for premiership points but after 2 or 3 years it is was scrapped due to poor attendances.

The AFL are persisting with the China games with Port Adelaide and when you look at the low crowds at the game you just shake your head and ask why bother.
Does the AFLX compromise the attention that is given to the AFLW?

No, I don’t think so. It is perfectly okay for the AFL to have a few things happening at the same time. The AFL has lots of items on their agenda at the same time. One is the women’s game; another is testing out this kind of format.

The AFLX was only on one Friday night and I don’t think it clashed with an AFLW game.

I remember, during the 1980s, when the VFL was talking about making the competition Australia-wide, some fans were against it. If the VFL didn’t become the AFL, then perhaps today there would not be professional Aussie rules footy as we know it today. Maybe the AFLX will prove to be successful in time. The AFLX could have unforeseen positive outcomes.

My guess would be that the AFL budgeted for expenditure on AFLW and on AFLX and that they are two separate events.  Fans that dislike AFLX say that the money spent on AFLX would be better spent on grassroots footy which is an argument but if can be used for everything.

For example, I have heard fans that don’t like the AFLW say that the money spent on AFLW would be better spent on grassroots footy. Where does this argument stop? Would it be better if the players weren’t paid such high salaries, and some of that money be invested in grassroots footy?

How do you imagine the viability of the AFLX event?

Can the AFLX be regarded as a ‘sporting event’, or is it just a ‘spectacle’?

AFL, AFLW and VFL are sporting events and entertainment/spectacle. The AFLX would probably be considered at the lower end of the sporting spectrum and at the higher end of a spectacle. Then again, the pre-season JLT games would be also considered by many fans as a practice match/spectacle.

The element of the spectacle was increased by allowing the crowd (who had paid for their tickets) on to the field and to get up close to the action. Fans were having their photos taken with players. There was a lot of fun and entertainment for children: the game was just a part of the event.

It seemed that the top deck of Docklands was closed on the night of the AFLX event and fans were sitting in the middle tier. Do you think fans would welcome this initiative during the regular AFL(M) season? Fans on the field, getting autographs from star AFLX players. Photo: Ron Issko

I liked it and I would welcome it for the regular season however I suspect it will cost the clubs and AFL too much money lost which goes against the MO of the AFL. Just imagine the furore if more fans attended the game than estimated and fans were “locked out” of a game with the top deck empty!!! Bad brand damage for the AFL and competing clubs.

There was a little over 20,000 at the event. Is this a good figure? I understand that there were a lot of free tickets distributed in various ways.

I think the AFL were expecting 25k so 23K as the official attendance would be considered a good result. If they didn’t give away so many free tickets would less fans have turn up? Probably a few thousand less.

There was enough of crowd for the event to work. The event though was quite long and I did notice some fans were leaving before the start of the final match. It was around three hours long in total which was probably too much for many of the children and families who were there.

Does AFLX represent the death of Aussie Rules, its re-birth, its answer to cricket’s T20, or just another folly from Gill and his team? Do you think that they think this will make the game more accessible globally?

Someone at the AFL said why can’t we have our version of T20 cricket, but then AFLX was invented. Do they want to take it overseas perhaps but the talk coming out of the AFL was it was aimed and the younger generation of kids. They would need to make it successful in Australia before venturing overseas.

AFLX is neither the death nor re-birth of Australian Rules football. It is a kind of experiment in testing fans’ appetite for a modified game and an effort to attract new audiences.

The AFLX provided some of the top players with an opportunity to make a fast buck. Perhaps though the biggest winner was Marvel who were able to lather the players in their iconography, turning each and every player into a Marvel brand ambassador while they mimicked the gestures, movements and actions of Australian rules footballers. The carnivalesque and relaxed atmosphere was a long emotional distance from the heightened anxieties of the big games that take place on the MCG in front of 80,000 plus between traditional, suburban rivals.