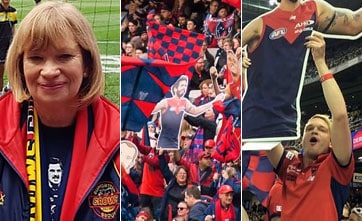 Annie arranged, planned and oversaw many barbecues for her club, its sponsors, fans, multicultural football carnivals and open training sessions. She oversees weekly raffles at all home post-match gatherings, including all prizes, and plans social events and supporter meals at hotels.

This includes planning and overseeing a dinner for 150 people, including players, as part of the Crows Supporter Group fundraising towards the Adelaide Football Club.

Annie missed the last quarter of every Crows home match this season to set up her raffle in the Magarey Room at Adelaide Oval, a huge sacrifice for anyone who is footy-mad. She also oversees supporter buses to Melbourne and puts in an incredible amount of time for her club.

Annie was “in shock” when told of her award. “I certainly am not a one man show and I could not have done all I have done without the support of the committee and other CSG members,” she says.

Everyone in the Demon Army knows Ryan Sinclair, who is always front and centre on game day.

“Ryan draws Dees fans to him because they all want to be like him,” says Demon Army stalwart Suzanne Considine. “He is the group’s ‘Pied Piper’. He stands with the biggest of the group’s big flags and hasn't missed a game in more than 15 years, including Melbourne’s exhibition match in China.”

Ryan is continually adding new big flags, player head cut-outs and full body player cut-outs to the Demon Army’s red and blue toys. To him, there are never enough. “All these toys are Ryan’s ideas,” Suzanne says. “He’s such a big kid! Heaven help us when our team actually starts playing fabulous footy week in, week out!”

Ryan is responsible for many of the Demon Army’s creative cut-outs. He came up with idea of the PacMax cut-outs (Pacman meets Max Gawn), which fans see the Demon Army waving.

Ryan’s friends say he is the the most optimistic Demon in the country, with his heart and soul truly invested in his beloved club. He was Melbourne Football Club’s Volunteer of the Year 2016 (shared with SopGaler).

Supporter Group of the - Demon Army

In 2012, Melbourne's Cheer Squad had little to cheer about. Its team was poor on field and the group’s co-ordinator faced health and technology issues that limited her ability to help.

Given the club’s dire situation, who could possibly want the role of Cheer Squad co-ordinator? Enter Ryan Sinclair and Sophie Galer, who joined existing members Gary Anderton and Suzanne Considine to usher in a new era. They rebranded from Cheer Squad to Demon Army and embraced those who wanted to help. Numbers rose from 150 in 2012 to more than 550 in 2017.

The Demon Army has placed a huge emphasis on inclusiveness and making people feel part of the family. More supporters are actively involved and everyone wants to get in early to grab their favourite player head cut-outs and full body player cut-outs.

Eight huge flags are now also part of their arsenal. Multiple cars are needed to carry all the gear and the group has eight giant flags, which all the kids want to wave.

This season the Demon Army sold out its interstate ticketing allocation and begged for more for the away games in Adelaide, Hobart and Canberra. It holds social events and continues to grow and welcome new members, working hard to make them feel part of the club.