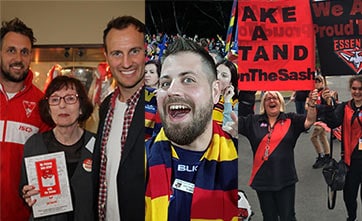 An Adelaide work-horse and a Sydney fan who moved states to be closer to her team have been named AFL Fans Association male and female Fan of the Year for 2016.

Robert Smith was a standout nomination with numerous fellow fans pointing out his dedication and the hard work he does to keep the group thriving and travelling interstate.

Jan Courtin is a lifelong Swans fan who moved from Brisbane to Sydney to be closer to her team and has written a book about her football journey.

The Adelaide Cheer Squad, better known as the Crows Supporters Group, and the Essendon Cheer Squad tied for the Supporter Group of the Year Award.

Robert lives and breathes the Crows, coming from a strong Crows family. Robert spends many, many hours organising banners, flags, floggers and seating arrangements in the cheer squad for home games. He also helps organise tickets, buses and seating arrangements etc for interstate trips for the Adelaide Football Club fans. Robert goes above and beyond what is expected to make sure everything is perfect for the Club, the Crows Supporters Group members and the fans for every match day. Also on match day, once he has all the cheer squad gear sorted he then heads over to Crows Central to meet up with other supporters. Robert has even taken days off work to make sure everything is just right for away trips.

When not at the footy, Robert is involved in many PR exercises for the club, fundraising, helping with the Crows Supporter Group Facebook page and answering everyone's questions on the site. He works hard to keep fans informed about how they can be involved in the Cheer Squad. He attends all the Crows AFL games, even after being injured in a car accident at the start of the 2016 season. His biggest disappointment while hurt was being unable to wave his huge silk flag. Robert is credited by numerous fans who contacted the AFLFA with revitalising and transforming the Crows Supporter Group in recent years. He is also noted by many as always welcoming new faces and never ignoring a query.

Born in 1943, Jan’s great uncle Jim Caldwell, captained South Melbourne’s 1918 premiership team. Born into a Bloods family, Jan attended her first match in 1948, when she was just four. She did not miss a game (except when at boarding school for a couple of years) for 20 odd years. When living in London in the 1970s, she abandoned a holiday in Germany with her mother to return to London to fly to Melbourne to see the Swans play in their first final since 1945, before going back to the UK. Returning to Australia and living in Brisbane for 22 years, Jan attended as many games as possible in Melbourne and then Sydney, and did not miss a finals match. After the Swans made the 1996 Grand Final, she declared “I’m sick to death at not being able to go to the games each week and not being closer to the Swans. That’s it, we just have to sell up, leave Brisbane and move to Sydney.”

Jan arrived in Sydney at the end of 1998 and her team’s success has followed. Since then Jan has attended every home game and many interstate, and after retiring in 2010, she and her husband, Marshall, have travelled the country to attend every match, except a few in Perth. Jan also writes for The Footy Almanac and has released a book, My Lifelong Love Affair with the Swans, which was launched this year by Sydney club luminaries. Former chairman Richard Colless wrote the foreword. Jan donates 10 percent from the sale of each book to the GO Foundation, a charitable organisation established by Adam Goodes and Michael O’Loughlin to provide Indigenous children with scholarships to quality schools.

Supporter Group of the Year (Sydney)

This award was a tie, shared by:

The Crows Supporters Group has significantly lifted its colour and presence in recent years and is credited with encouraging more people to become involved in chanting and flag waving. This group goes above and beyond providing equipment, chants and banners on game day. Its members fundraise and support the club by cooking at BBQs for club sponsors. They also organise buses and tickets for away games.

With hard work behind the scenes, the committee also secured cheaper bus fares for away games. This season they've set up and run Crows Central which operates pre and post home games. They also run raffles at the club post-match functions and assisted the club by helping put T-shirts on every seat at Adelaide Oval. They also organise the Sportsman's night - a dinner for supporters and players.

Essendon Cheer Squad was recognised for its loyalty in turning up week in, week out, despite much of its team being suspended due to the supplements scandal. Few cheer squads have endured such a negative period and the Essendon squad was nominated for displaying enormous dedication and still managing to have some fun during an extremely tough year. The cheer squad took it in their stride and never faltered. Its members remained loyal to a fault and have shown to be true supporters of their club.

Honourable mentions also go to the Port Adelaide supporter group "The Aberton Crowd" who finished a close second.
WELL DONE TO ALL OUR WINNERS! 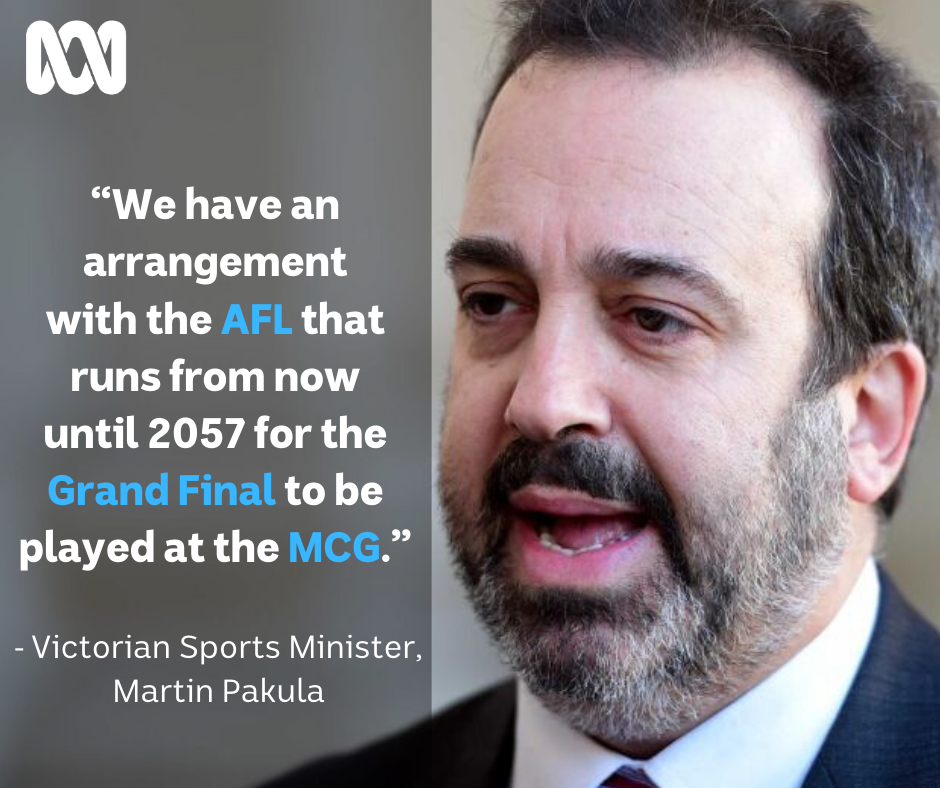