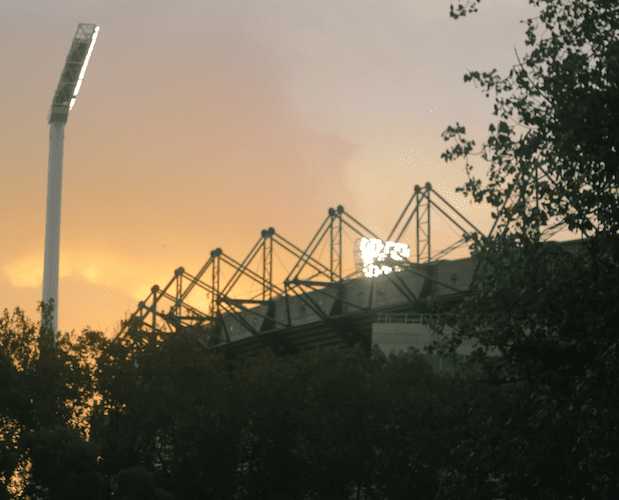 The CEO of the stadium in Docklands has said he will be reviewing security practices at said-stadium. There was indeed quite a reaction on twitter to the sight of 'behavioural awareness officers'. Fans were thrilled at being eyeballed and intimidated by security staff as they strode up and down the isles of the Disney-themed AFL-owned Stadium.

Michael Gleeson in The Age writes, "Football is the game of the people. [...] Football fans have lost the sense that the game is theirs. They feel that by stealth, the game has been taken away from them."

Joffa, a supporter of the AFLFA, is unhappy and is calling for a boycott. He regrets that the fans are taken for granted. He regards the terraces as a place for exuberant expression, where fans of different types come together and are accepting of each other. Footy is something which unites. He writes: "The terraces bring us together in victory and in defeat. We embrace football as we embrace life, with vigour and passion. Some are loud and some are quiet, some terrorise the terraces wearing a sequined jacket. Many stand to deliver a spine-tingling chant in the last quarter to acknowledge victory. That's what we do. That's who we are."

Richard Hinds, of the ABC, writes of the over-reaction of the AFL in response to some occasional trouble in the stands. He concludes by stating that: "The congestion remains, the scoring is even lower and there are even more reasons for fans to become frustrated with the umpires who have had a target painted on their backs by the officials very well paid to protect them."

All players and football staff will need to be vaccinated under the AFL's new COVID-19 vaccination policy. ... See MoreSee Less

Should Richmond and Carlton continue to open the AFL season?If not, who should in 2022? ... See MoreSee Less

Melbourne have asked the AFL for their grand final rematch against the Western Bulldogs to be played on the Friday night of round one.
View on Facebook
· Share

Racism. It Stops With Me! We need your help, please read on. ... See MoreSee Less

AFL Fans Association · Thursday, October 21st, 2021 at 10:30pm
@FansAFL
Racism stops with us and we need your help. 👇 https://t.co/mjEDMZE5lR
View on Twitter

AFL Fans Association · Wednesday, October 13th, 2021 at 6:19am
@FansAFL
Two "selfish" Victorian men who breached Western Australia's strict COVID travel laws to go to the AFL grand final and ended up in the rooms of the victorious Melbourne team have been handed 10-month jail terms. But seven months will be suspended.
https://t.co/xu0KjEHqyI
View on Twitter
1
15

Gold Coast Suns@GoldCoastSUNS
As a club, we're committed to the fight against racism. https://t.co/ubLCdRypmW
0
10
Follow @FansAFL