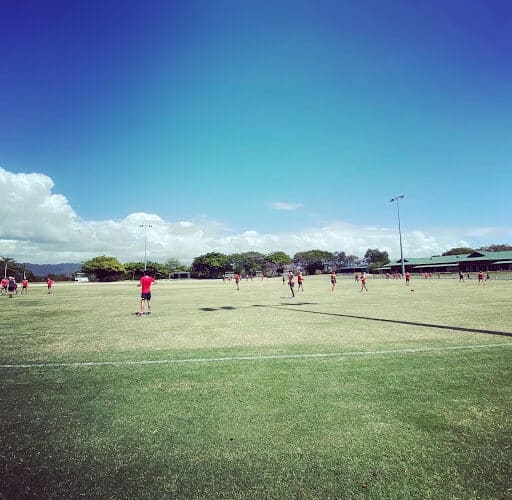 In a win for local AFL, the Sydney Swans trained at the Port Douglas Crocs homeground on Tuesday before flying out for their final round match at Metricon against Geelong, writes Paul Bugeja

In what can only be described in the best sense as bringing the game to the fans, the Sydney Swans did a one-hour light skills drill at the Port Douglas Sporting Complex, homeground of local AFL side the Crocs.

Attendance by the local community was excellent, with well over 100 people turning up, including Douglas Shire Mayor Michael Kerr and his fellow councillors.

But it was maybe most exciting for the large contingent of AFL-loving local school kids in attendance. Some lucky juniors were given time out from school to watch on with starry AFL eyes - unwittingly a part of AFL history in an historical year of so many other AFL firsts due to the COVID-19 pandemic - in having a side of the Swans calibre training at their local ground.

And, while strict COVID-19 AFL protocols were in place around keeping a safe distance from the fans, the Bloods did not let the locals down, with coach John "Horse” Longmuir wandering the boundary to greet and chat with the locals.

Many of the players also gave the fans attention in an acknowledgement to everyone who had taken time out of their days to watch the session.  And get off a whole lot of mandatory selfies, of course!

Luckily for the Swans and the crowd, some forecast rain held off and the day was blue and heat at a manageable level.

And yet it was still typically tropical Far North Queensland warm enough to have the likes of skipper Josh "Joey" Kennedy and other teammates, such as Tom Papley, strip down to just shorts to avoid overheating...and maybe work on their tans?

To the delight of the school children present, and in that wonderful way AFL clubs are so good with their acknowledgement of the importance of fans to the game, the session ended with a bundle of signed mini footballs being kicked or hand-balled out.

This is what footy is all about.