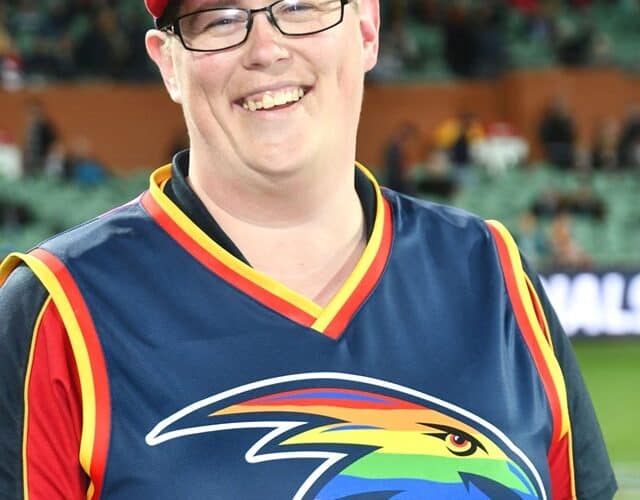 Dedicated fans recognised for their passion and support

Rainbow Crows volunteer Megan Harris is the 2019 AFL Fans Association Fan of the Year after being nominated for her dedication, selflessness and support of the Crows’ men’s and women’s teams.

A Collingwood Facebook group that promotes a love of the club and keeps fans informed is the 2019 Supporter Group of the Year. The Side by Side Fan Page won for its upbeat approach and original, creative and funny content. It also promotes positive discussion among Magpie fans.

AFL Fans Association president Gerry Eeman says both winners epitomise the dedication of many fans. “These supporters give so much to their clubs,” he says. “They are proud, passionate and spend many hours volunteering to improve the footy experience of others.”

A Rainbow Crows member, Megan Harris spends an incredible amount of time volunteering with the Rainbows Crows and the official Crows Supporter Group.

Megan's match days often span eight hours, driving to West Lakes to collect the banner and other things to take to Adelaide Oval, arriving hours before the game, setting up the flags and floggers in the cheer squad and helping to get the banner ready.

Sometimes she leaves during the last quarter to help set up the after-match function. Megan regularly travels to the club during the week to organise and transfer equipment.

She has attended all the home games this year and travelled interstate for some women’s and men’s games, including by car with the banner several times. She was regularly AFLW banner coordinator, attends cheer squad banner making sessions, and helps with soup night at men’s training.

“Megan has also assisted with barbecues at the Toyota family events and a variety of other events during the year,” one nominator said. “She has done an extraordinary amount of work and her life revolves around our club and both supporter groups.”

Another nominator pointed out that Megan organised the Rainbow Crows participation in the 2019 Mardi Gras: “As a result of Megan’s efforts, 21 people from 4 different states … came together to celebrate love, diversity, and their passion for footy.”

Supporter Group of the Year: Side by Side Fan Page

Claudio does all the moderating himself. He started the page to publish content that he would like to see. Treating the players as people is first among his key principles. It makes him happy when he sees that family members of Collingwood players become members or like what he has posted.

Claudio lives in South Morang and cannot attend every game but watches them all. Maintaining the page helps him stay engaged when he is unable to be at games or training sessions.

He always acknowledges any contributions to the page, whether they be videos, images or wallpapers.

As one nominator said, “Side by Side … is a no-nonsense Collingwood fan page that NEVER spreads negativity, fake news or rubbish of any kind.

“They always keep me up to date about EVERYTHING I need to know about Collingwood, from memes, to injuries, to fixtures and scores, everything I need to know is conveniently in one place.”

AFL Fans Association · Saturday, December 10th, 2022 at 5:22am
@FansAFL
The 2023 fixture has been released. Note that for rounds 16 onwards the dates and times are yet to be released
https://t.co/sT2rAXYDf9
View on Twitter