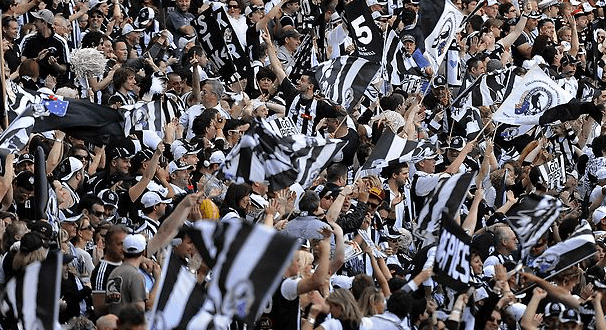 Most of the time, we go to the footy and there is very little trouble. Most of the time, fans engage in playful banter with each other and even when there are strong disagreements, most of the time, there is no violence. Most fans are able to self-regulate, knowing when to draw the line and prevent anything from becoming too heated.

We have received a few messages in which fans have recounted their stories about being harassed by overzealous and heavy handed security. Sometimes, fans have been given 'final warnings' by police even when they haven't been informed about what they were doing wrong, let alone given a warning to begin with.

Below is a message from Craig, a Collingwood member who sent his story. Needless to say, he is less than thrilled about his 'match day experience'.

I am Collingwood member who goes to the footy every week with my young son and my Dad. We have reserved seats to every Melbourne game, so we sit next to the same people every week.

There is a middle age man that sits two rows in front and a bit to our right. But, he is in the same bay at the G. He yells and screams, but never swears. He is never racist or rude. It is kind of funny: by half time his voice is almost gone.

Last year at a game, the on-ground security (we are six rows from the front) was pointing him out and gesturing to something towards the guy. I thought this was strange, then all of sudden, four security guys came down and they asked him to go with them. All the members quickly jump to his defence, with older ladies siting in front of him and next him, asking what the problem was. They refused to say and asked everyone to stand back so that the gentleman could leave his seat and go with them.

Well, a number of larger men near him, stood next to him and said he had done nothing wrong. Security said they would get the police, which was met with response “Go get them, then.” The security realised that they could not get near him, because the wall of people around him. They retreated. When a goal was scored the on ground security guard jumps up, stands to face the crowd as he does, notice the guy is still in his seat. The security then proceeds to point out the guy and is in the radio. The on-ground security’s furious and starts to walk in the guys direction.

By this stage the poor guy is a shadow of himself, and he is as quiet as a mice.

The police never came and the guy got to watch the rest of the game, with the threat of security standing at the entrance way that goes under the bowels of G. What I discovered later on, when I spoke to a few people that sat nearer to the guy, is that the guy has an intellectual disability; with some brain issues. So he can be loud, but he never crosses the line.

I recount this story, because after the last few weeks where members of the crowd have been kicked out, it concerns me that the security are being heavy handed in their approach to crowd behaviour. Maybe they don’t understand the passion of the game, maybe they are reacting to orders from their bosses.

My 68 year father had his premiership mug that he pours his coffee into, taken off him at the security check point a few years back. He has poor hearing, and didn’t know what was going on. Security said it could be used as a weapon if it was thrown. I laughed and said my 68 yr old dad is not going to throw his prized premiership mug. An older security guard said we could have it back. It’s common sense that is not being applied.

Watch after the game, when the players hand out footy to their fans. The security follows some of the players like they are the president of the US. Fans aren’t going to hurt their beloved boys.

My son is nine years old and I would never expose him to poor behaviour from a footy crowd. That is why we sit next to the same people every week to avoid this. I can leave my bag to go to the toilet and trust that people around will watch it for me, that is how good it is in the outer.

Footy is about people, emotions and passion. If we lose this, then it’s not much fun. Crowds at games will decrease if the AFL keeps restricting the public from having a good time.