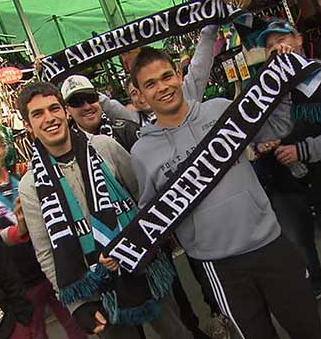 Come on, admit it. If you don’t follow Port Adelaide you were a teensy bit jealous of the colour and movement at their home games last season. The Adelaide Oval was literally rocking as Port stormed towards the finals with the help of a catchy song, choreographed teal and black scarves, full houses and an amazing atmosphere.

Much of the turnaround from a few seasons earlier, when Port was mercilessly ribbed for covering empty stands with tarps, is due to the hard work of a dedicated group of fans.

The Alberton Crowd (TAC for short) is the brainchild of diehards like co-founders Phil Rollas and Dimi Sianis, who were determined to improve the matchday fan experience. And improve it they have.

Founded and run by fans for fans, the group started in 2011 and is geared towards getting younger supporters actively involved. Phil says members are extremely active on match days with soccer-style chants and choreographed displays of banners, beginning with the large 1870: Forever Port Adelaide display.

The group looks amazing when members wave their scarves and larger-than-life flags, which were long envied by Victorian cheer squads who had strict flag sizes for years. Such restrictions experienced in Melbourne will change this year with new AFL CEO Gillon McLachlan relaxing the 1.5 metre restriction, so it will be interesting to see what they come up with.

Last year The Alberton Crowd and thousands of their fellow Port Adelaide supporters – who the group positively view all as being ‘part of the “Alberton Crowd” – marched to the Adelaide Oval together for each home match, usually from the Hotel Richmond in Rundle Mall, waving those flags and scarves before heading to Bay 124 and singing the now famous Never Tear us Apart anthem inside the ground before the game.

Some say the Port pre-game experience is now unrivalled in the AFL.

“We’re an ‘active support’ supporter group,” Phil says. “About 99 per cent of us have association football/soccer ‘backgrounds’, or equally follow the sport in some capacity as we do Aussie Rules. We refuse to be seen as a ‘cheer squad’ as we do more than that. Our focus is on match day support through noise and colour - so much like the supporter groups of the A-League and in particular the support seen in English football.”

The Alberton Crowd has quickly established a big following. Last year Port Adelaide was rewarded with a preliminary final appearance and a narrow loss to Hawthorn after smashing a disappointing Richmond at the Adelaide Oval elimination final.

The atmosphere at the elimination final was electric, with the chanting continuing all day. Despite a huge number of Richmond fans making the trip from Victoria, The Alberton Crowd dominated, putting together a large ‘Never Tear Us Apart’ tifo display – a massive, hand-stitched, drawn and painted banner that was held up above the heads of the occupants of Bay 124.

Phil and his fellow TAC members, some of whom also helped found an Adelaide United A-League several years ago, hope to go one better this year.

“The supporter dynamic is vastly different between both sports, and while atmosphere and noise levels can be compared, the cultures cannot. This is something the mainstream media don’t understand,” he says. “We learnt a hell of a lot in a short time, including mistakes, and over time took this across to TAC. We’ve since ‘retired’ from the active support scene with Adelaide United, but have dozens of friends carrying on the work in spirit that we essentially built back over the summer of 2011-12.”

Phil says when the TAC started in 2011, the AFL atmosphere and supporter culture in Adelaide were “pretty much non-existent, and dull”. “We wanted to change that. And we did. We still are - and we will keep going until we have nodes on our vocal cords. There’s always work to be done. We have to stay hungry, always look for improvement and new ways of doing things. We need to always think progressively.

“We use a wide range of chants, flags of all sizes (including many massive ones) and other things to create some atmosphere. We started up the ‘holding the scarves’ movement during ‘Never Tear Us Apart’ before the first bounce of each match, are the focal point for game day support and have a very broad reach across the league.

“Fans of other clubs look to us to an extent, with the likes of Fremantle’s and Sydney’s Cheer Squads all looking to us for inspiration.”

But it hasn’t been easy. Phil says it has been a lot of hard work and it took two years to “find our niche”. “We couldn’t be too much ‘football/soccer’, but still wanted to be completely different,” he says.

“It was in 2013 that we found our feet, and in 2014 we were able to realise our vision a bit more. It also required money. We pushed the boundaries of supporter-run community engagement, restricted to social media and our pre-match events (at the ironically named Hotel Richmond). “We are going to keep pushing the envelope. Since early 2014 we’ve been playing with the revolutionary concept of a “Donors Group”, where anyone who donates money to the group can have a say in what their monies are used on. You can expect that to be pushed even more over 2015.

“We will soon unveil two of a whopping FOUR custom, fan-made scarf designs for the PAFC community (or anyone really); a website; we’ve just done a new logo; and a designated Tour of Duty in July. We will also likely be in a position to sponsor a player. 2015 is set to be big, and busy.”

The Alberton Crowd encourage everyone and anyone to keep a close eye on their Facebook page as their massive plans for the 2015 season begin to unfold.

In reply toCarlton Cheersquad
Tuesday, August 11th, 2020 at 9:17am
@CFCCheersquad Sorry to hear this sad news. Condolences to everyone at Carlton and to Henry's family and friends. #RIP
View on Twitter
0
4

AFL Fans Association @FansAFL
Tuesday, August 11th, 2020 at 9:14am
Would you want a festival of footy in some form every year?
#AFL
https://t.co/gVOZRIhNwX
View on Twitter
0
15

AFL Fans Association @FansAFL
Thursday, August 6th, 2020 at 7:10pm
The #AFL is yet to settle on a venue for the 2020 Grand Final.
And while Gillon McLachlan has said the match will be at the MCG until it physically can’t, Western Australia is making a pitch to host the biggest game of the year.
https://t.co/TMKV9hn7pb
View on Twitter
0
0

AFL Fans Association @FansAFL
Wednesday, August 5th, 2020 at 8:03am
Interesting piece by Rohan Connolly on the AFL Media saga and changes to the AFL website.
What do you think of the site these days?
https://t.co/bQ9p0rOqPH
View on Twitter
1
2

AFL Fans Association @FansAFL
Tuesday, August 4th, 2020 at 6:18pm
On behalf of all #AFL fans, sincere sympathy to Eddie McGuire on the loss of his mum, Bridie, and Luke Darcy and the loss of his dad, David. #RIP
https://t.co/WFT1IwlU6f
View on Twitter
0
16
Follow @FansAFL